It is unimaginable that people could look on at a game of football and forget themselves in the ecstasy of a winning goal at the moment when their comrades, maybe brothers, are making gallant and stupendous efforts at the front, even sacrificing their lives for the life of the nation.

In August 1914, war broke out in Europe, driving Britain into a patriotic frenzy. WVery quickly, all rugby matches in England and Wales were suspended to help the nation to concentrate on the push for victory.  There was no similar official suspension in junior and amateur soccer but, with so many players joining up, many competitions were abandoned anyway. By December 1914, 1,217 players affiliated to the South Wales and Monmouthshire FA had enlisted and nearly a hundred clubs had disbanded.  At the end of the season, there were just seventy affiliated clubs still active, 325 fewer than the previous year

The press looked to professional soccer’s authorities to follow rugby’s moral lead but, fearing financial losses and expecting it all to be over by Christmas, the FA and Football League decided to play on.  The FAW followed suit with its president claiming that to interfere with football would be nothing short of ‘panic legislation’.  He argued that soccer fulfilled a large place in the organized life of the nation and that its discontinuation would only produce undesirable results.  Although many professional players had already enlisted, and some of the smaller professional teams disbanded, those clubs that did play on faced a battle of their own.

The government and the War Office may have supported the continuation of professional soccer but elements of the public and press saw things rather differently. The first two months of war saw letters and editorials in south Wales and national newspapers denouncing the playing of soccer during a time of crisis.  It was felt that since footballers were fit young men looked up to by much of the public, they should be setting an example by enlisting.  Some critics believed that playing and watching the game were not necessarily wrong if the players and spectators were too young or too old to enlist.  They accepted that sport had a role in relieving public tension and anxiety. However, the more extreme antagonists felt that the whole concept of spectatorism was wrong in a time of war and the sight of thousands of young and able men enjoying themselves at matches during wartime sickened them. 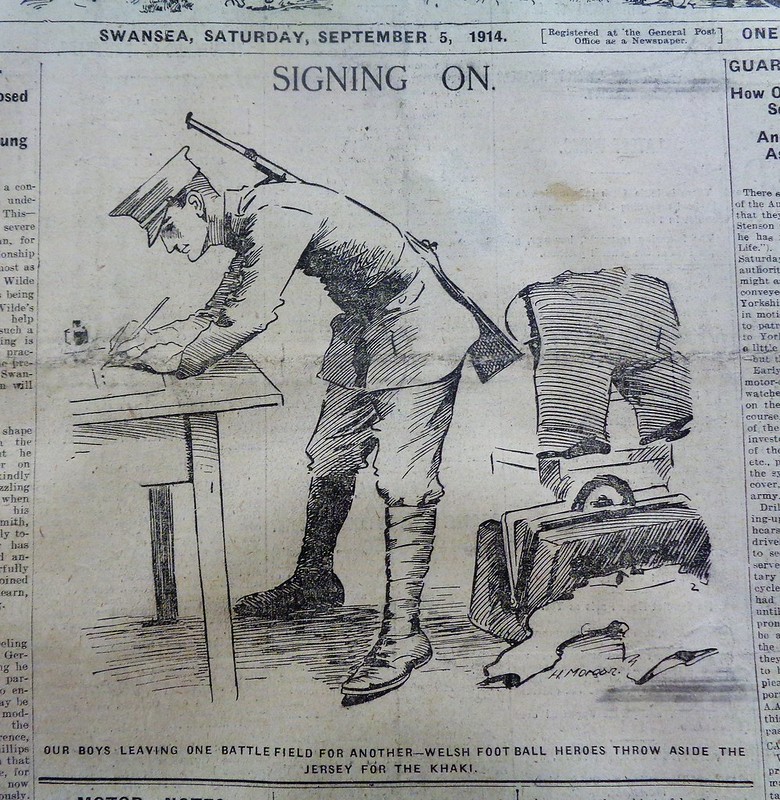 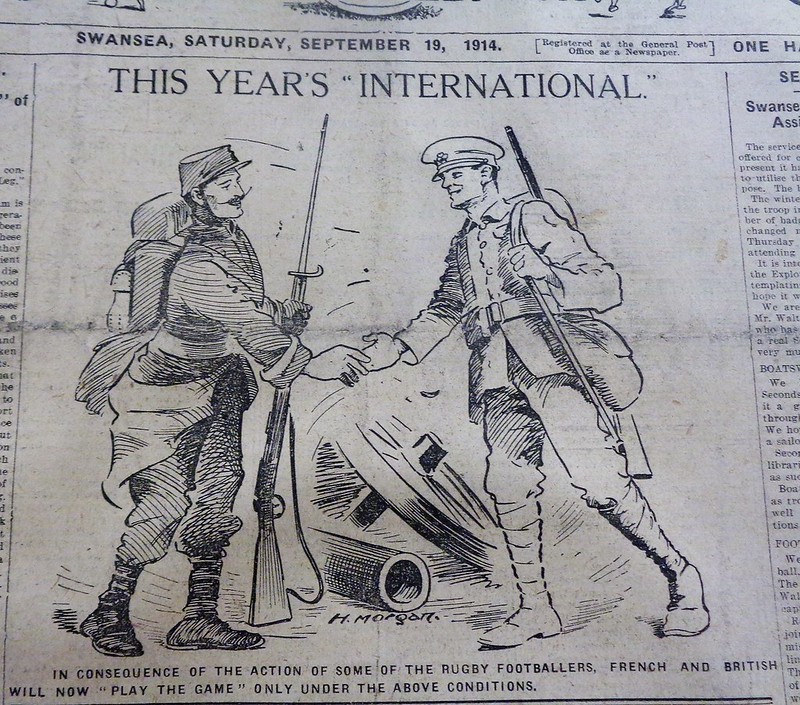 The south Wales press printed lists and pictures of famous, and not so famous, rugby players who had joined up, thus indirectly criticising professional soccer.  The decision of Swansea Town’s directors to contest the military’s decision to requisition the Vetch Field was subtly criticised after one member of the board suggested that the War Office could have the ground if it took over the club’s liabilities.  The implication that the club and the game were putting their own finances before the nation’s needs was made clear by the press article then moving on to look at new recruits from the town’s rugby fraternity.

In an effort to make a stand against the continuation of soccer, the South Wales Argus announced that it would not report any football news for the duration of the war. The South Wales Daily News also chose not to print match reports in the first few weeks of the 1914-15 season but, as attendances showed that the public were still interested in professional soccer, the paper slowly increased the coverage it gave to the game.

Other papers also reversed their stance and made it clear that sport was acceptable during the war. 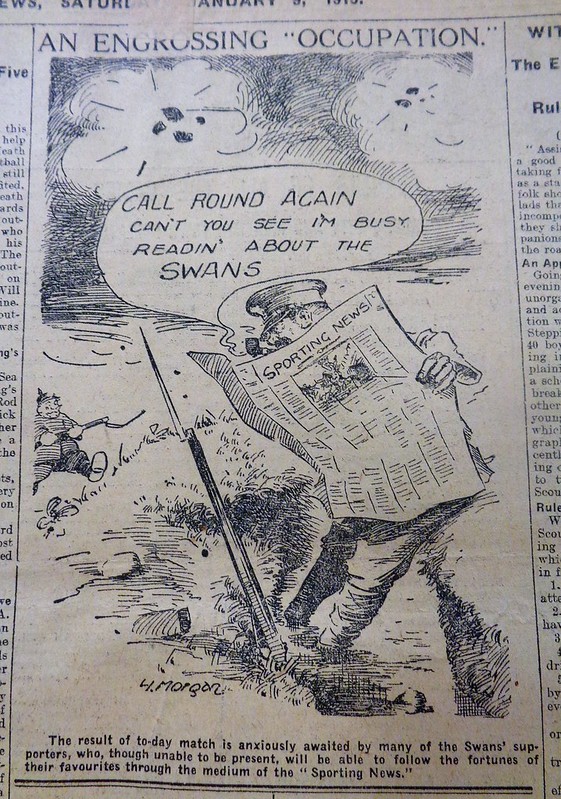 Despite the allegations that professional soccer was unpatriotic, the game was helping the war effort.  Grounds were made available to the military for drill or training at any time other than Saturday afternoons, most clubs gave their players rifle practice, and some even paid them in advance for the 1914-15 season to allow them to enlist.  On occasion, soldiers were let into matches half-price in an effort to show that the game was doing its bit, while spectators regularly found themselves the target of enlistment campaigns. The 7,000 spectators at a Welsh League match between Swansea Town and Llanelly in 1914, a third of whom were eligible for service according to a self-righteous reporter, were addressed by six different speakers, including the mayor and club chairman, on the virtues of enlistment.

The immediate impact of such appeals was limited in south Wales.  The Times used the fact that only six recruits came forward after appeals at a Cardiff City match as an example of the selfishness of the game and its followers.  However, as the club pointed out, hundreds of its supporters had enlisted, while the majority of the rest were involved in the coal and rail industries, integral parts of the war effort.

Nationally, soccer gave the state easy access to large numbers of potential recruits from working-class communities and thus became an important vehicle in the recruitment campaign. The wartime hostility towards soccer in England was not widespread and actually represented the resentment of exponents of amateurism at the usurpation of the game by professionalism and the working classes.

In south Wales, antipathy towards soccer was even less common and given disproportionately large publicity by a patriotic press.

Restrictions on rail travel and a ban on mid-week games played havoc with fixture lists and soccer found it harder and harder, in both financial and practical terms, to continue.  In November 1914, the FA estimated that, on average, attendances had fallen by approximately fifty per cent.  Cardiff City’s average in the Southern League dropped from approximately 11,700 to around 9,300. Other clubs, like Mardy AFC of the Southern League, already operating on tight budgets, suffered critical declines in their gates and closed before 1914 was out. The soccer authorities’ restrictions on players’ wages caused further tensions within clubs.  Cardiff City players threatened to go on strike in 1915 over the issue of their benefits.

By the end of the 1914-15 season, it was clear that the war was going to be a long affair and the FA decided to suspend league and cup programmes.  Falling attendances and practical problems had achieved what the anti-soccer agitators could not. A new makeshift league involving Cardiff City, Newport County and teams from south-west England lasted just a season because of low gates and rail restrictions.  Cardiff City’s average attendance during the season was a meagre 1,700. 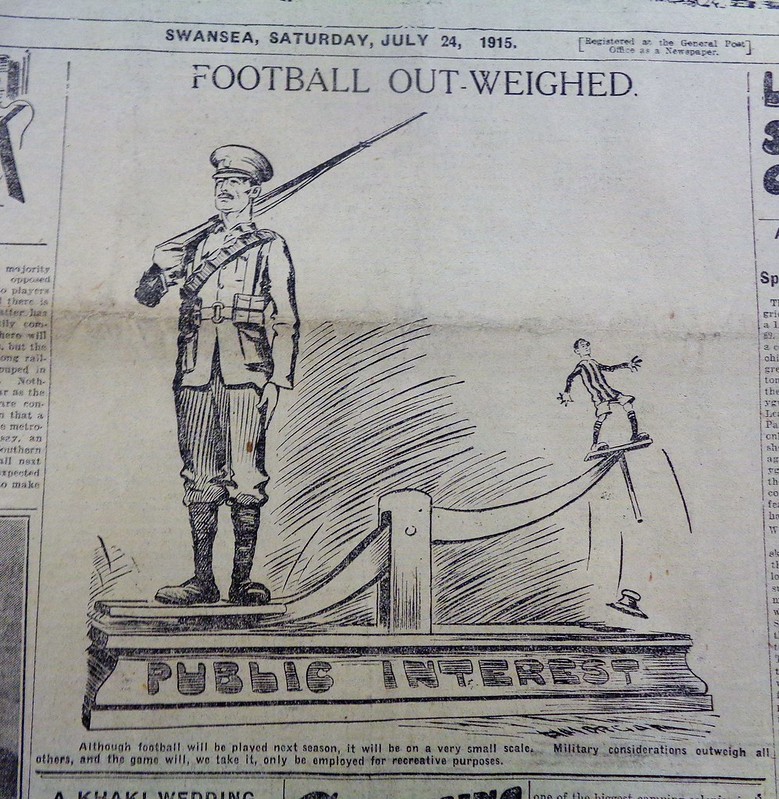 1916 saw the introduction of conscription and the call up of most of the eligible professional players who had not enlisted voluntarily.  Junior leagues did continue throughout the war, offering light relief from the hardships of the home and overseas fronts, but professional clubs spent the rest of the war playing the occasional friendly with teams of amateurs and guest professionals. Without the regular income of popular matches, the expense of paying rent and ground maintenance proved difficult.  Cardiff City, Merthyr Town and Swansea Town survived the war but few other clubs were so fortunate.  Yet the real loss was the 35,000 to 40,000 Welshmen killed in the war, among them a host of amateur, professional and international players.

For those who returned, the war was a watershed in their personal lives.  Fred Keenor of Cardiff City served alongside other professional players in the 17th Middlesex (Footballers’) Battalion and a leg wound threatened to end his footballing career before it had really started.  In later years, he mostly refused to speak of his experiences on the Western Front.  As his son put it, ‘Dad blotted it out. He had lost too many friends. He often said that he was one of the lucky ones who came back’. On being demobbed, the ‘land fit for heroes’ was no more immediately apparent to Keenor than it was to most other returning soldiers.  He found work in a gasworks and on a milk round before rejoining Cardiff City when professional football resumed in 1919 amidst much excitement.