Students starting history degrees in 2020 will be in unusual positions. It will be six months since they were last in a classroom. Some are worrying that not taking A Level exams will hold back their transition to university. This short blog is some suggestions of things students can do to help prepare.

In many ways, reading anything is preparing for university. Being comfortable with spending a lot of time in a book is important.  Reading novels is a great way to both develop this skill and to start thinking about the past.

One book that everyone interested in the history of the modern world should read is George Orwell, Nineteen Eighty-Four (1949). Quite simply, it is one of the most (or perhaps the most) important novels ever written. It is about how power operates, and the role of history and knowledge in that. Its observations on oppression, privacy, freedom and what we now call fake news are very pertinent for the present day too. It also reminds us of how much fear for the future there was after the Second World War.

There are a vast amount of good historical podcasts out there. They are not dissimilar to lectures and are thus an excellent way of getting used to listening historians talking about subjects at length.

The National Archives have many that are very useful, partly because they often talk about the sources that history is based on. Here are a few particularly useful ones for the Modern British history. They will help you think about how varied history can be but also how we can assess and judge the past.

Films about the past

Historians can be sniffy about their accuracy but historical movies really matter because they reach audiences far in excess of anything an actual historian ever writes.

Watching a variety of films on the same topic can be a very useful historical task. It helps us understand the public understanding of the past and it also involves a skill that is central to studying history – history at university is not just about studying the past but also about comparing and evaluating the ways that past has been interpreted and understood.

A fascinating and moving film that captures one perspective on women’s history and the First World War is Testament of Youth (2014).

It’s based on a famous memoir by Vera Brittain and portrays the growing disillusionment with war that some people felt. Alongside the war poetry of Siegfried Sassoon, Robert Graves and others, the original book was part of a genre that has led some people to think that was how everyone felt about the war. This genre influenced later tragic portrayals of the Great War such as War Horse and even Blackadder goes Forth. In this view, the war was something futile.

The pride many soldiers felt in what they had done has been rather written out of depictions of the war. You can see it, however, in Peaky Blinders when characters discuss the war. Even the recent Wonder Woman film could be argued as having some historical worth for how it portrayed the First World War as a battle against evil. That is how many people saw it at the time. Sometimes historical insights can be found in curious places. It doesn’t matter what you watch as long as you don’t just accept it as true!

Films from the past

Rather than just watching films made about the past, it’s also useful to watch films made in that past. They bring it to life in a way the written word perhaps can’t. Of course, they are selective in what they depict but no source is ever without ‘bias’. 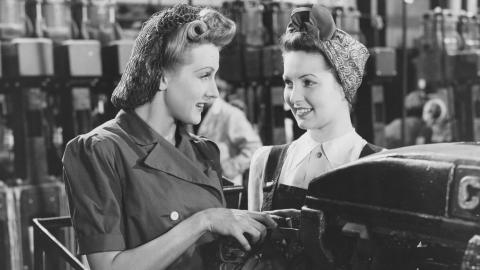 The 1940s was something of a golden era for British cinema and offers rich viewing. Millions Like Us (1943) was a propaganda film designed to encourage people to feel their sacrifices were important and shared by people across Britain. It’s a vivid portrayal of the home front, class and gender, or at least how the film makers wanted the home front, class and gender be seen. It’s well worth watching and thinking about how audiences during the war would have felt about it. Did they think they were being manipulated? Did the film feel true to them? Does propaganda need to be subtle to work?

You can watch it here https://www.youtube.com/watch?v=pNglGkEmYDE and read more about it here: http://www.screenonline.org.uk/film/id/442138/index.html

Whatever you watch or read, it’s worth writing something about it. Put your thoughts onto paper or screen. It doesn’t matter if it’s blog, a Facebook post, or a message to a friend. Writing helps give shape to your ideas. It develops confidence that what you think matters (and it does!). Studying history is all about interpretation. There aren’t right answers. So practice telling others what you think about stuff, whether it’s historical, political or personal.

At university (and in many jobs) you will have to write a lot so using the written word is a skill to develop but so too is talking. Discuss things with whoever you live with. Articulate and debate but remember to listen too. Listening to others is key to learning.

History degrees are not really about what you know but about how you think. They encourage you to be critical about what you read and watch and to think about how things compare and connect to each other. These skills matter in the world and will help you in all kinds of jobs.

Thus what really matters in getting ready for university is not learning about specific things from the past but keeping your brain active. Read, think, talk and write! Just do that and you will be fine.