As part of a project looking at the suppression of the Welsh language in 19th century schools, I have spent some time this week reading the logbooks of elementary schools. These were diary-like records of school life that headmasters were required by law to keep from the 1860s.

Given there were hundreds of schools in Wales, knowing where to start is a daunting task. Ideally, I would like to read every one and come up with stats that quantified the different approaches to the Welsh language. That would be a huge task and one where the outcome would not be worth the effort since most don’t actually seem to make many references to Welsh at all.

Thus I’m being selective in which ones I look at. This morning I concentrated on a school in the Gwaun valley in Pembrokeshire. This was because I had come across a 1920s letter to a newspaper from a man who recalled the Welsh Not being used there when he was a pupil in the 1880s.

Given the school’s single teacher, one Mr Llewellyn, was a man who apparently punished his pupils for speaking Welsh, I began reading with a disapproval of him. Maybe the historian should not start with a sense of judgement about the people being studied but I think that’s impossible. We certainly have to be careful of judging the past through modern values but this just means remembering the judgments being made and thinking about how that affects interpretations.

In this case, I did not feel too bad about expecting to dislike Mr Llewellyn because the Welsh Not was unusual by the 1880s. Most of education seems to have moved on by then and Mr Llewellyn was behind the times.

Unfortunately, the log book made no reference to the Welsh Not at all or indeed give any clue that his pupils did not speak English when they started school. Instead, the section from the 1880s was one sustained weather record and a repeated moan about very poor attendance and the impact of this on school learning.

At first, this was not very informative but gradually a picture of rural school life emerges. And the more I read, the more I began to feel sorry for the poor teacher.  He despairs about how he can teach when half the school are regularly absent. Rain, snow and heat all keep children at home because many had to walk some miles to get there. So, too, does hay making, crop sowing and harvesting, local fairs and chapel meetings.  Some children go three or four months without turning up. Many simply say when they do eventually attend that they were needed at home.

The inspection reports the school received were scathing and a copy of each one was handwritten into the logbook by Llewellyn.  This in itself cannot have been a pleasant task. They question his physical ability to run a school alone. At first, I thought this meant more staff were needed but the second reference to this implies that he is not fit or healthy enough. I picture an ill man. The reports also question why some pupils are not there on inspection day, implying that they are being kept away so as not to affect the exam results. Arithmetic and sewing are  the only subjects that seem ok, perhaps because they did not require English-language skills.

The School Board comes in for criticism too. More needs to be done about absenteeism and Llewellyn needs an assistant. There are no inkwells. The poor reports lead to cuts in the school’s government grant. I magine a frosty relationship between Llewellyn and the board that empoys him. Llewellyn records at one point: “The teacher is altogether blamed when an unfavourable report is given at the annual inspection of the school”.

Eventually one Summer holiday he resigns. Perhaps he had no choice. But after ploughing my way through 150 pages or so of his handwritten laments, I feel rather sorry for him and have forgotten how he used the Welsh Not. Maybe the picture in my head of a bent, elderly and frustrated teacher working to the ends of his wits is wrong. Maybe he took out his frustrations on the children and was vicious and bad tempered with them. The possibility of my sense of him being wrong is why the sympathy I developed should not shape the analysis. But it did shape my emotional experience of doing the research.

Whatever the poor standard of education in the school or the evils of the Welsh Not, forty years later one of his pupils exhibits no anger in recounting that this small peice of wood was ‘considered one of the most serious sections of the day’s curriculum’. Indeed, he relates the story of a farm boy turning up late to school and explaining to the others “Our donkey had a small donkey”. He was asked when but confused this for the Welsh word for white (wen) and replies “Nage, un ddu” (No, a black one). For this, he was presented with the Welsh Not. The letter does not record what the punishment was.

Such humorous stories of confusion were not uncommon in recollections of the Welsh Not. Like the experience of archival research, they are a reminder that emotions are not always what we might expect. People, after all, are complicated and little in the past is straightforward. Decent people can still do bad things. People who have bad things done to them can still laugh. And the historian can feel for them both, without losing the objectivity needed for analysis. 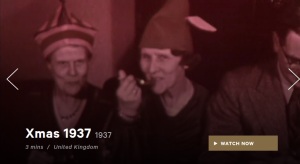 Not much happens in any of the films and the absence of sound adds a rather surreal feel. The people featured are not named. We can only guess at their ages and what they are saying. They are all clearly aware of the camera but they are also carrying on pretty much as normal.

Everyone gives and receive presents, they eat meals and play games and most people laugh and mess around a bit. There are some nice shots of living spaces, furniture and seasonal decorations and some touching hugs and thank you kisses. It’s all very ordinary. Although Christmas is the most unusual day of the year, some of what makes it special is just doing everyday things with the people you love.

Some of the films come from the same family and watching them in order allows you to see fashions in dress and furnishings evolve, adults age and lose their hair, and their young children grow into teenagers. A slightly grumpy looking grandfather appears in the first of the sequence but not in any of the subsequent ones. By the last one, his wife is in a wheelchair and looking frail. Christmas always reminds people of the passage of time but these films actually chart it, in all it sadness and joys.

There has been much talk online recently about the need for radical histories that challenge and confront the present. That is, of course, important but so too is history that is more mundane because, for most people throughout history, daily life has been just that.

People eat, drink, sleep, travel, work and play. They love and they lose. Histories of such things do not have to have a political relevance, a challenge or a lesson for the present. But they can remind us that the past, like the present, is about real people. As historians we make people into numbers, categories and classifications but they are still are individuals too and watching them celebrate Christmas is a vivid reminder of that.

My favourite of the home movies can be watched here: http://player.bfi.org.uk/film/watch-family-christmas-1952/

My book Christmas and the British: A Modern History will be published by Bloomsbury Academic in 2016.

It’s been announced that government records will begin to be released after 20 rather than 30 years. On the whole this is good news for historians but we shouldn’t expect too much, especially from the records of Cabinet.

As Simon Ball’s (1995) research has shown, only rarely do newly released records radically change existing historical interpretations.  When it comes to British government, we already know ‘what’ happened and ministers have usually said something about ‘why’ in the media and in their memoirs. On the whole, what new government records do is in fill in the gaps of our existing knowledge of decision making.

Some of the most interesting material in government files relates to decisions not taken but considered. Yet even here there are limits to what we can learn.  The full breadth and frankness of discussion gets lost. This is partly because it can take place unrecorded in the bar, in the corridor and on the phone. But even in formal meetings the historic record is not full or accurate.

Richard Crossman’s dairy recorded that cabinet minutes are ‘a travesty [which] do not pretend to be an account of what actually takes place in cabinet’. Yes Minister tried to explain why:

It then goes further:

As with all humour, it’s funny because there is a grain of truth here and Lowe’s research (1997) has shown the difference between the minutes actually taken at cabinet (something strongly denied by the Cabinet Office) and those published.

The really interesting stuff in the files of government is often not the minutes of the highest levels of government but in the departments. It’s not the material written by politicians but by civil servants and by members of the public writing to government. There historians can mine the National Archives and begin to understand how government works and what people in and outside government thought about what was going on.

Ball, Simon, ‘Harold Macmillan and the politics of defence: the market for strategic ideas during the Sandys era revisited’, Twentieth Century British History, 1, 3 (1995), 78-100.